The Power of the Tiny 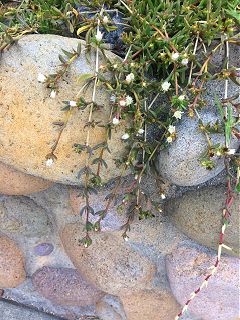 I was out on my daily walk the other day, and my eye was riveted by these tiny flowers whose plant was draped enticingly over some river rocks in a wall. Unexpectedly, as I admired these precious flowers, I was overcome with emotions of beauty, poignancy and reverence.

There has been much fervor lately about new quantum physics research that may definitively prove that physical, natural geometries are indivisibly and invisibly connected to human consciousness. Or, to be more precise, human consciousness is a part of an ocean of conscious intelligence actively creating and expanding into geometric matrices underlying all physical creation.

My emotional experience with these tiny flowers seemed to subjectively prove to me that, no matter the "size" reference, the underlying "morphic field"--or energy matrix--expresses itself infinitely and timelessly through every category and perceived class of physical matter. There is no true division between "big" and "little"; no true difference between our emotional states and what is created from them; no actual separation between "me" and "you". All of it is a great big ball of interconnected and interdependent energies.

In fact, in other new research, it was found that emotional states directly change physical matter, proving the illusion of separation between what we feel and what we experience is the great veil eclipsing our direct experience of the divine. The perception of time tends to throw us off and obscure this perennial truth, yet when we can step back in mindful allowance, the truth behind the illusion is inescapable. 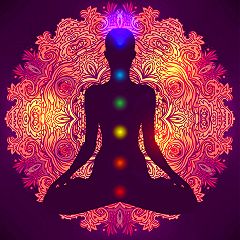 in the ancient practice of non-duality, the perception of "opposites" is discovered to be a manufactured point of view that we use to define and separate groups of things from other groups of things. Apparently, this is for the purpose of playing a game, or, more basically, having the ability to perceive: without dark, there is no light; without vacuum there is no form; without ignorance there is no knowing; without forgetting, there is no remembering; et cetera, et cetera.

In fact, the observable universe can be seen as a unimaginably huge generator powered by the infinite energies created from nothing to something; or, as a vacuum into an atom--the "zero-point" theory of energy generation. As is clear in the practice of non-duality, there is infinite multiplication from zero to one. It is the supreme dynamo of creation itself.

And we have that ability within our being to bring forth something from nothing. It is the function and destiny of consciousness--ever expanding, ever ramifying, ever evolving--from the enormity of the greatest galaxy clusters to the tiniest of flowers on a rock, there is no escaping the truth of our own power of creation.