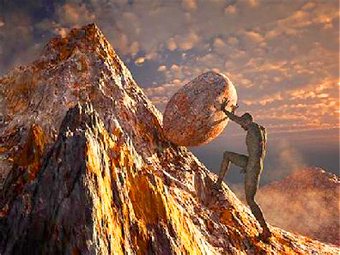 I'm not long for this world. Not to say I'm leaving a world, but to say this current externalized world is not where I'm headed. Call it a "parallel universe", "alternate timeline", or "dimension"--it's the journey I've come here to undertake.

What I wasn't prepared for (and I guess very few are) is the sheer density of resistance, judgement, stacks upon stacks of conclusions and decisions against this journey I would face for the 65 years I've been on this dusty road. There are rewards. Stuff like blowing through fixed ideas, envisioning new possibilities, and spotting and evaporating hundreds of identities--usually formed from other people's expectations.

It seems, as I look back from whence I've come, that I sort of fell into this experience without really doing any due diligence--a sort of jump into the abyss without first bothering to find out what the hell is at the bottom of it. It seems somehow irresponsible, and certainly unthinking, if not downright dumb. And yet, I took the plunge and for 65 years have struggled in a seeming unending stream of disappointments, failures, stupidities, pains and sufferings, that, had I known about these in advance, I most certainly would never have come here.

But I did. So the big, flashing neon question looming before me is,"WHY?". Not that all this has been one big helping of sour grapes, as I've worked through all those regrets...mostly. In fact, self-forgiveness is essential for disempowering regrets, and this can only happen after you forgive "everyone else" you believed were the cause of all your suffering and discomfort in life.

I mean, my needs and wants are simple, really: and unencumbered life, free of economic restraints, creative blocks, and the freedom to experience whatever I please. Wait. What. Is that all? I'm smiling at myself for writing that, yet that IS the Utopia I've been trudging toward. It seems simple, yet after 65 years of going in what I've thought was that direction, it's difficult to not feel resisted against by life.

And there it is. Resisted by life. The Big Lie. The only thing resisting me is me. What I call "life" is simply the sensory experience of this particular mirroring consensus frequency, where it's automatic to be shown "evidence" of external resistance. These quantum entanglements of what looks like resistance are in reality my own evaluations and juried indictments of my own value.

The longer I trudge toward my personal Utopia, the more often I look at the mileage, and it goes up every time I look at the sign: 500 miles to Utopia, becomes 5,000 miles to Utopia. It is daunting, demeaning, and fully a reflection of my own internalized value and willingness to accept as valid my needs and wants. It's the feeling I'd get as a kid on a long family car trip: "How many more miles, Dad?" He should have then said, "As many as you feel are necessary, son."

What is this unknown and seemingly unknowable quota of miles? How much of this trudging and gazing at the mirrored increasing mileage signs must I perform? It feels like the story of Sisyphus, who was punished for his self-aggrandizing craftiness and deceitfulness against the gods by being forced to roll an immense boulder up a hill, only for it to roll down when he neared the top, doomed to repeating this action for eternity.

Punished for craftiness? Deceitfulness? Perhaps punished for a crime he really didn't commit, but was convinced of it by the gods? The crime of being himself? The crime of having desires? The crime of needing freedom? Granted, Sisyphus was a trouble-maker in the eyes of the gods--so much so that the gods could not forgive him, and instead sentenced him to an eternity of unrelenting labor and failure. 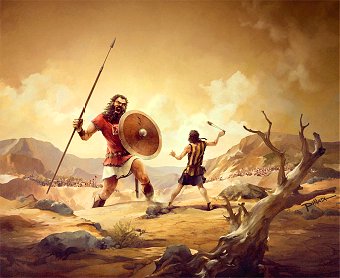 Of course, the metaphor for "the gods" is the Higher Self--that overseeing consciousness beyond space and time, and yet also a participant in life with the temporal self. And here we have the crux of the matter. The temporal self can look out upon the world and see a reflection of past decisions, past and present states of being, and externalized intentions. The Higher Self looks upon the entire life--past, present and future--and like the Biblical Creator on the 7th Day declares "All is good."

I'm coming to believe that assuming the Higher Self's viewpoint of "All is good" is the bridge between the endless trudging journey and the Utopian life. Perhaps it is all really the same thing--the exaltation of Utopia made all the more exquisite by the journey. After all, we do live in a dualistic world, where we can slingshot from one end of the spectrum to the other, sometimes instantly.

Like David and Goliath, I see myself releasing the slingshot of a lifetime of pain and suffering, aimed directly at the Goliath of my own resistance, slaying the monster that said my life has no value, and that I must endure endless frustration and failure. Goliath falls with a great thunder, and I am free.

Posted by Boyd Martin at 3:55 PM No comments:

The Art of Non-Duality 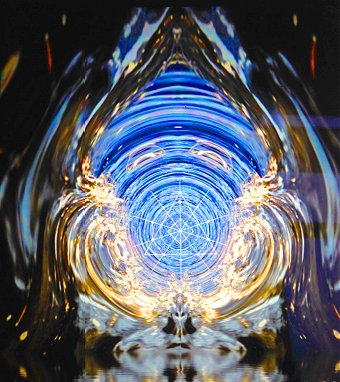 I keep coming back to this "non-duality" concept, because it is so much at the crux of creation, and indeed, why we as infinite creators continually choose to participate in such an extreme form of duality.

It is a dramatic world of opposites, contrasts, and all the messy grey areas in between. Don't we have something better to do than to get all tangled up in this morass? Well, no. You see, by experiencing and being these extreme states of opposites, we come to know ourselves as infinite beings. By the sheer contrast of the non-being and solidness represented by life here on Planet Rock, it reveals to us our infiniteness.

Most of what we experience is what we are subconsciously co-creating with all these other infinite creators. It doesn't seem like we are creating the universe of our lives because most of what is being created is what we subconsciously agreed to be a part of coming into this life. As we "wake up", or become aware of this fact, we can then start making conscious choices about what we prefer to experience.

What it takes to wake us up, though, is usually a carnival ride of torturous swings from one extreme to the other. We are seemingly tossed back and forth from dark to light, hard to soft, easy to difficult, and everything in between. The bewildering input of contrasts assaulting our senses seems to be more of an attack against us, throwing us into defense mode.

Is it any wonder that most of us just put our heads down and take the path of least resistance, complying and compromising our own preferences in the hope of "getting by", "fitting in", and fergawdsakes not rocking the boat. It seems easier, or at least a whole lot less threatening to find a somewhat comfortable niche, and dig in, hoping to avoid any real revelation of the infiniteness of who we are, and the crushing responsibility of our own creations.

With the advent of the the planetary information web (the Internet), and the inevitable development and involvement in "social media", or what I call selective hive minds, we can compartment and validate our own value systems, creating our own self-bubbles that shut out dissenting views or emotional conflict. This serves to amplify our responses when we stick our heads up every once in a while and are bombarded by the seeming insanity of an opposite world assaulting us. We either quickly duck back into our comfort zones, or take up arms to attack those opposing our niches we've become so attached to--mostly in self-defense.

There eventually arises a desire to "rise above it all", to transcend the hive minds, and get beyond all the conflict of this Opposite World. This is Nature's way of squeezing our consciousness into present time awareness, and drives us to be mindful and non-judgmental about everything around us. It's the only way out, really, and even though it's difficult, it's certainly preferable to living in a hole in defense mode.

Our lives then become a series of self-awarenesses about our automatic responses developed in self-defense to assaults on our personal values and ego attachments. The door has opened, and now we cannot go back--what is seen cannot be un-seen, and leads to more awareness and more clarity. At some point, there is a reckoning, and in a slow flash we start to see this conflicted world as the birthing of something greater, something inherently beautiful in its becoming--a world where polarities merge into a continuum of necessities, much like the birthing process where writhings of pain morph into the beauty of a new life.

It all needs to be there. It's all happening because it's supposed to happen. All the suffering, pain, agony, joy, glory, and poignancy coalesces into one immense, amazing and glorius birthing event. There are no longer opposites, but spectrums of being--none better or worse, or righter or more wrong than the other. Without the one there cannot be the other, and both are required for what is being wondrously created.

It becomes a matter of dropping all our requirements of what "should be", un-creating all the evaluations, judgments and conclusions about what we see and experience "out there". And by doing so, "out there" becomes "in here", and at last we have a shot at truly creating the glorious world we've always known is possible.

Posted by Boyd Martin at 5:39 PM No comments: